Even as the fourth wave of COVID-19 cases trends downward, one aspect of the pandemic remains strong: differing opinions on the value of COVID-19 immunization and vaccine mandates across the US.

Strong feelings around vaccination are nothing new. Claims that link the measles, mumps, and rubella (MMR) vaccine to autism and opposition to measles vaccination that triggered outbreaks in California are recent examples.

People who were against smallpox immunizations, for example, ran advertisements, wrote to newspapers, and formed antivaccine organizations, as seen in news clippings from the 1860s to the 1950s.

In other words, although the furor over vaccines feels like a modern experience, disagreements throughout history reveal many similarities.

“There are a lot of parallels — many of the same exact arguments,” says Anna Kirkland, PhD, director of the Institute for Research on Women and Gender at the University of Michigan in Ann Arbor.

“Some of the differences now are the stark political alignments by party that we see under COVID, which were there in some ways before but became very prominently organized by party,” she says. “Those are only differences of degree, though, because there has long been an antigovernment backing of antivaccine sentiments.” 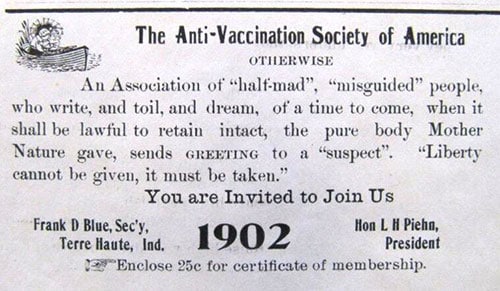 For example, the Anti-Vaccination Society of America was founded in 1879. Its public campaign against mandatory smallpox vaccination used wording about personal freedoms that might sound familiar today: “Liberty cannot be given, it must be taken.”

The society was part of a larger movement that also questioned the motives behind promotion of the smallpox vaccine.

“The antivaccination movement questioned the data released by health authorities, and accused politicians, doctors and pharmaceutical companies of conspiring to act on their economic interests rather than health considerations,” notes MyHeritage, which maintains an archive of pro- and antivaccine news clippings.

“For this reason — and because MyHeritage has access to billions of historical records, including newspaper clippings — it was natural for us to check the newspaper archives, to try and make sense of today’s significant vaccination debate,” says Roi Mandel, lead researcher at MyHeritage. 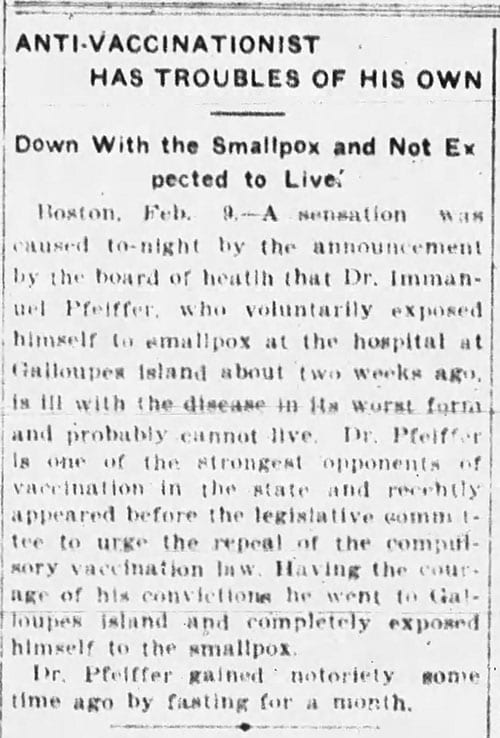 Other historians point out that the antivaccination movement in the US got its start in the 1850s with the announcement of smallpox vaccine mandates.

“Much of that movement was predicated on widespread concern about the safety of smallpox vaccine, as well as a belief that vaccination laws were ‘a tyrannical violation of individual liberty,'” wrote Joseph B. Domachowske and Manika Suryadevara, both MDs, in a 2013 report in Human Vaccines & Immunotherapeutics.

“Unfortunately, the antivaccination activism helped bring about a significant decline in immunization rates, resulting in the re-emergence of smallpox just a couple of decades later,” they said.

“The main reason to refuse vaccination in the 21st century US are very similar to those in 19th century UK,” says José Esparza, MD, an adjunct professor at the Institute of Human Virology at the University of Maryland School of Medicine.

Some studies indicate that the number of people absolutely opposed to a vaccine is not more than 4% of the population, he says. But the proportion can vary from country to country and from community to community, says Esparza, who is also senior adviser at the Global Virus Network in Baltimore.

“A very important point is that antivaccination is fueled by a very vocal but small minority,” he says. “What is interesting is that the one cause of vaccine refusal that is emerging as a dominant one is related to ‘resistance to compulsory vaccination.'”

This also reflects “a political position that defends the individual right to choose,” he says. 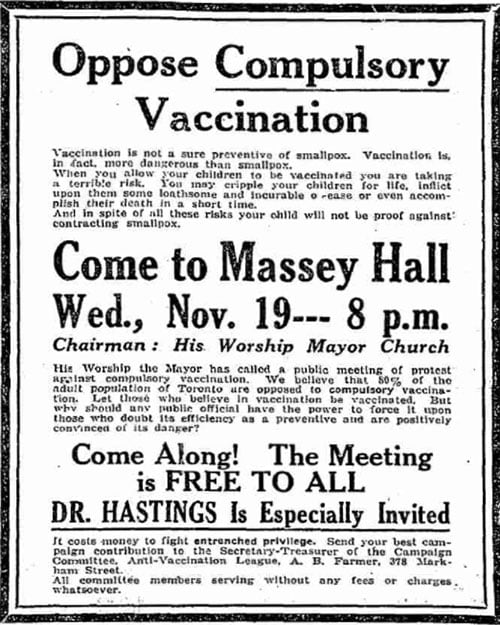 Yet, history shows that “compulsory” vaccinations can be a success.

“Mandates of some kind have usually been a part of the solution,” Kirkland says.

Vaccine policies for smallpox varied by state as well, another parallel to the COVID-19 pandemic today.

Massachusetts was the first to impose compulsory vaccination in 1809. Washington, DC, and eight other states later joined in requiring infant vaccinations.

Other state officials opposed such mandates, and by 1930, Arizona, Utah, North Dakota, and Minnesota had passed laws against vaccination requirements for their residents.

A total of 35 states did not have legislation for or against mandates, and instead allowed local authorities to regulate such actions.

The US Supreme Court ultimately weighed in on a compulsory vaccination case in 1905. Jacobson v. Massachusetts set legal precedent by finding that individual liberty does not supersede actions required for the public good.

“The liberty secured by the Constitution of the United States does not import an absolute right in each person to be at all times, and in all circumstances, wholly freed from restraint, nor is it an element in such liberty that one person, or a minority of persons residing in any community and enjoying the benefits of its local government, should have power to dominate the majority when supported in their action by the authority of the State,” the court wrote.

The 1905 case has been cited during the COVID-19 pandemic to support orders for face masks and stay-at-home orders.

Parents opposed to vaccinating their children is nothing new, either.

For example, a newspaper in Meriden, Connecticut, reported in 1915 that a father was jailed instead of paying a fine for not allowing his children to be vaccinated. 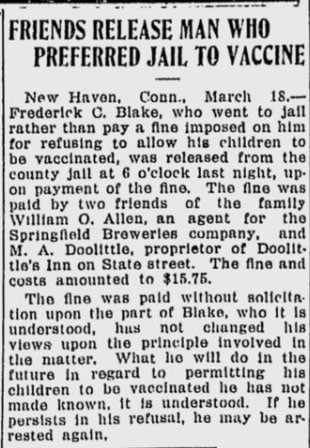 Even after friends paid $15.75 to gain his release from county jail, the man “has not changed his views,” according to a newspaper clipping.

Eighty years before Facebook and other social media platforms emerged, differing opinions often were aired in newspapers. For example, an open letter in The Evening News of Hawaii on June 26, 1924, was called “To Vaccinate Or Not To Vaccinate: Anti-Vaccinationist Replies.”

The anonymous writer stated that doctors “have been led to believe that vaccination is a safe and sane way — the only way — of wiping out smallpox. Nothing could be farther from the truth.”

“Instead of protecting its victims from smallpox, vaccination actually renders them more susceptible to it by contaminating the blood and diminishing natural resistance,” the writer said.

The letter raised a familiar refrain that healthy people needn’t worry as much about contracting the illness:

“Smallpox is a filth disease which follows closely upon the flagrant violations of the laws of hygiene and health. No person is susceptible to smallpox or any other filth disease, so long as he is in a state of health.

“Every human being can be protected from smallpox if he has sufficient air, sunshine, wholesome work, good food and interest in life. These give immunity.”

The newspaper editor, Lorrin A. Thurston, countered: “I believe the antivaccinationists are wrong — absolutely and completely so — and that their ceaseless and fanatical propaganda against vaccination is liable to ultimately mislead many who know better, into neglecting or opposing vaccination, to the damage and possible death of themselves and numbers of innocent members of the community.”

Thurston acknowledges a risk involved in printing and thereby calling attention to antivaccinationist “propaganda” but adds an “intensely dislike” to preventing full and free discussion on any subject.

A strongly worded piece in The Star Tribune on April 17, 1903, for example, expresses frustration with the antivaccine movement. The author notes that people who oppose vaccines are also those most likely to die from smallpox.

“The state can do nothing to save men who are resolved to ‘die as the fool dieth,’ except to prevent them from involving others in their fate. That is the purpose of the compulsory vaccination law, which seems oppressive to many…,” the piece states.

The author adds that if the antivaccinationist “is determined to evade” the compulsory vaccination law, “he can do so in a hundred ways. But the law of nature will reach him soon or late. There is no dodging that.” 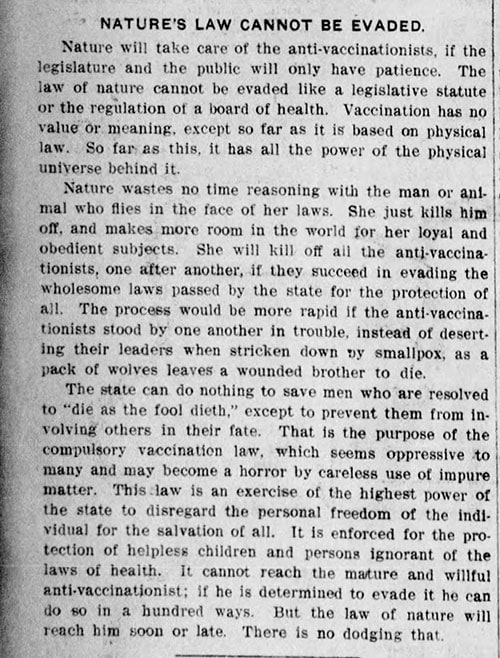 One tactic used to promote greater vaccination was to publish reports of people heeding the call to get their smallpox vaccine. For instance, The Star newspaper in Canada highlighted how the Jewish community in Toronto was coming forth to get vaccinated in November 1919. 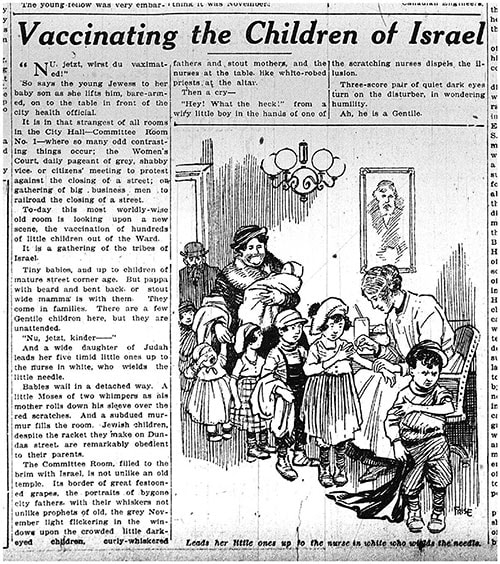 Controversies over the polio vaccine continued into the 1950s, prompting health officials to call on doctors, community leaders, and celebrities to help counter antivaccine sentiments.

The Boston Post reported calls from doctors, public health organizations, and charities for people to get vaccinated, for example. Also, a March of Dimes ad showed a procession of Disney characters singing “Hi ho, hi ho, we’ll lick that polio.”

Backstage before appearing on The Ed Sullivan Show in 1956, Elvis Presley received the polio vaccine from New York City officials, as shown in this summer 2020 report in Humanities, the magazine of the National Endowment for the Humanities.

Elvis was immunized in front of the press and Ed Sullivan himself. At the time, polio was infecting about 60,000 children in the US annually.

“Despite the literally crippling effects of the virus and the promising results of the vaccination, many Americans simply weren’t getting vaccinated. In fact, when Presley appeared on the Sullivan show, immunization levels among American teens were at an abysmal 0.6 percent,” according to a January 2021 piece in Scientific American.

The campaign was a success and changed some suspicious minds.

Within 6 months of Elvis’s vaccination, immunization rates among American youths grew to 80%. The accomplishment was attributed to Elvis’s social influence, how he changed the social norm, and his willingness to set an example.

The smallpox era likely will be remembered for many things, including the first vaccine developed against a widespread viral disease and for being the first infection humanity was able to eradicate. The last smallpox case worldwide was diagnosed in 1977, and by 1980, the World Health Organization had certified the world was free of smallpox for the first time in centuries.

How the COVID-19 pandemic and the vaccination controversies will play out is anyone’s guess.

“Another interesting point is that refusal to vaccination reflects the perceived degree of risk versus benefit,” says Esparza, the University of Maryland School of Medicine professor. “After 2 years of the pandemic, many people have made up their mind regarding their own risk to die of COVID-19 and are willing to take their risks.”

“While we wait for this difficult time to pass, we can at least draw comfort from the fact that people all over the world dealt with these same restrictions a century ago. And though it was surely hard for them, it didn’t last forever,” says Mandel, the MyHeritage lead researcher. “Things went back to normal after some time. A new kind of normal. And they didn’t have the technology and advanced medicine we have today.”

Damian McNamara is a staff journalist based in Miami. He covers a wide range of medical specialties, including infectious diseases, gastroenterology, and critical care. Follow Damian on Twitter: @MedReporter.