The continuing decline in COVID-19 incidence suggests the latest surge has peaked as new cases in children dropped for the 4th consecutive week, based on data from the American Academy of Pediatrics and the Children’s Hospital Association. 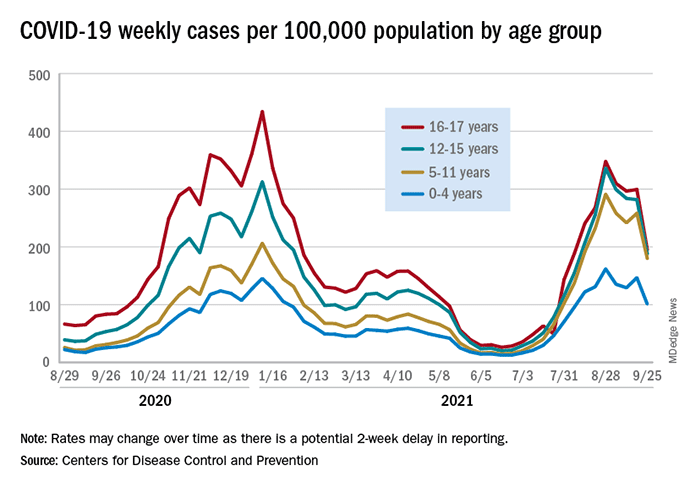 Preliminary data from the Centers for Disease Control and Prevention, however, show an uptick in new cases in late September, largely among younger children, that may indicate otherwise. Those data have a potential 2-week reporting delay, the CDC said on its COVID Data Tracker, so the most recent points on the graph (see above) could still go up.

The AAP and the CHA said that 173,000 new cases were reported for the week of Sept. 24-30, down 16% from the week before and 31% from the peak in early September. Those new cases made up almost 27% of all cases for the week, and the nearly 5.9 million child cases that have been reported since the start of the pandemic represent 16.2% of cases among Americans of all ages, the two groups said in their weekly COVID-19 report.

The CDC data on new cases by age group suggest that younger children have borne a heavier burden in the summer surge of COVID than they did last winter. The rate of new cases was not as high for 16- and 17-year-olds in the summer, but the other age groups all reached higher peaks than in the winter, including the 12- to 15-year-olds, who have been getting vaccinated since May, according to the COVID Data Tracker.

With vaccination approval getting closer for children under age 12 years, initiation in those already eligible continues to slide. Those aged 12-15 made up just 6.9% of new vaccinations during the 2 weeks from Sept. 21 to Oct. 4, and that figure has been dropping since July 13-26, when it was 14.1%. Vaccine initiation among 16- and 17-year-olds over that time has dropped by almost half, from 5.4% to 2.9%, the CDC data show.

All the vaccinations so far add up to this: Almost 55% of those aged 12-15 have gotten at least one dose of COVID vaccine, as have over 62% of those aged 16-17, and 52% of the older group is fully vaccinated, as is 44% of the younger group. Altogether, 10.8 million children were fully vaccinated as of Oct. 4, including those under 12 who may be participating in clinical trials or had a birth date entered incorrectly, the CDC said.

This article originally appeared on MDedge.com, part of the Medscape Professional Network.