The COVID-19 patient’s health was deteriorating quickly at a Michigan hospital, but he was having none of the doctor’s diagnosis. Despite dangerously low oxygen levels, the unvaccinated man didn’t think he was that sick and got so irate over a hospital policy forbidding his wife from being at his bedside that he threatened to walk out of the building.

Dr. Matthew Trunsky didn’t hold back in his response: “You are welcome to leave, but you will be dead before you get to your car,” he said.

Such exchanges have become all-too-common for medical workers who are growing weary of COVID-19 denial and misinformation that have made it exasperating to treat unvaccinated patients during the delta-driven surge.

The Associated Press asked six doctors from across the country to describe the types of misinformation and denial they see on a daily basis and how they respond to it.

They describe being aggravated at the constant requests to be prescribed the veterinary parasite drug Ivermectin, with patients lashing out at doctors when they are told that it’s not a safe coronavirus treatment. An Illinois family practice doctor has patients tell him that microchips are embedded in vaccines as part of a ploy to take over people’s DNA. A Louisiana doctor has resorted to showing patients a list of ingredients in Twinkies, reminding those who are skeptical about the makeup of vaccines that everyday products have lots of safe additives that no one really understands.

Here are their stories: 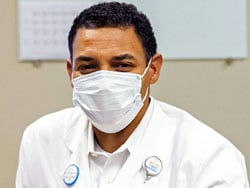 When patients tell Dr. Vincent Shaw that they don’t want the COVID-19 vaccine because they don’t know what’s going into their bodies, he pulls up the ingredient list for a Twinkie.

“Look at the back of the package,” Shaw, a family physician in Baton Rouge, Louisiana. “Tell me you can pronounce everything on the back of that package. Because I have a chemistry degree, I still don’t know what that is.”

He also commonly hears patients tell him they haven’t done enough research about the vaccines. Rest assured, he tells them, the vaccine developers have done their homework.

Then there are the fringe explanations: “They’re putting a tracker in and it makes me magnetic.”

Another explanation left him speechless: “The patient couldn’t understand why they were given this for free, because humanity in and of itself is not nice and people aren’t nice and nobody would give anything away. So there’s no such thing as inherent good nature of man. And I had no comeback from that.”

People who get sick with mild cases insist that they have natural immunity. “No, you’re not a Superman or Superwoman,” he tells them.

He said one of the biggest issues is social media, as evidenced by the many patients who describe what they saw on Facebook in deciding against getting vaccinated. That mindset has spawned memes about the many Americans who got their degrees at the University of Facebook School of Medicine.

Dallas ER Doctor: Baffled at How He’s ‘Lost All Credibility’ With Anti-Vaccine Patients

Dr. Stu Coffman has patients tell him they are scared about vaccine side effects. They don’t trust the regulatory approval process and raise disproven concerns that the vaccine will harm their fertility. He said the most unexpected thing someone told him was that there was “actually poison in the mRNA vaccine” — a baseless rumor that originated online.

He is confounded by the pushback.

“If you’ve got a gunshot wound or stab wound or you’re having a heart attack, you want to see me in the emergency department,” he said. “But as soon as we start talking about a vaccine, all of a sudden I’ve lost all credibility.”

He said the key to overcoming hesitancy is to figure out where it originates. He said when people come to him with concerns about fertility, he can point to specific research showing that the vaccine is safe and their issues are unfounded.

But he says there’s no hope in changing the minds of people who think the vaccines are laced with poison. “I’m probably not going to be able to show you anything that convinces you otherwise.”

And he thinks he could change people’s minds about the vaccine if they could follow him around for a shift as he walks past the beds of the sick and dying, almost all of whom are unvaccinated.

Dr. Ryan Stanton recently had a patient who began their conversation by saying, “I’m not afraid of any China virus.” From that point on, he knew what he was up against in dealing with the patient’s politics and misguided beliefs about the virus.

Stanton blamed people like far-right conspiracy theorist Alex Jones for spreading some of the misinformation that has taken root among his patients. Among them is that the vaccine contains fetal cells. Another said it “is a simple fact that the vaccine has killed millions.”

It’s tough to watch, especially after living through the early surges. On his worst shift last fall, an elderly nursing home patient arrived, close to death. She hadn’t seen her family in months, so staff wheeled her outside in the ambulance bay so her relatives could say their goodbyes from 20 feet away. He snapped a picture of the scene so he could remember the horror.

There was hope after the vaccines arrived, but then came the delta variant and a slowdown in immunizations.

“Really it amazes me the number of people who have this huge fear, conspiracy theory about vaccines and will honest to God try anything, including a veterinary medicine, to get better,” said Stanton.

For Trunsky, the vaccine pushback grew so intense that he turned to Facebook to describe the ire he confronts on a daily basis at his hospital in Troy, Michigan. The post listed eight encounters he had in the two previous days alone in which COVID-19 patients explained misinformation-fueled reasons for not getting vaccines or made demands for unproven treatments.

Example No. 5 was a patient who said he’d rather die than take the vaccine. Trunsky’s response: “You may get your wish.”

He has heard a litany of misinformation about the vaccine: They say it’s not proven and only experimental when in fact it is not. Others tell him the vaccine is a “personal choice and that the government shouldn’t tell me what to do.” He also has heard patients tell them they are too sick and didn’t want to risk the side effects of the vaccine. One young mother told him she wasn’t vaccinated because she was breastfeeding, although her pediatrician and obstetrician urged her it was safe. She had to be hospitalized but eventually got a shot.

Others, though, take out their anger on health care providers. Some threaten to call attorneys if they don’t get a prescription for Ivermectin, commonly used by veterinarians to kill worms and parasites. The drug can cause harmful side effects and there’s little evidence it helps with the coronavirus.

He estimates that he has cared for 100 patients who have died since the pandemic began, including the man who threatened to walk out of the hospital.

Dr. Carl Lambert hears lots of wild misinformation from his patients. Some comes from the Bible interpretations; some originates from the rapper Nicki Minaj.

Some of it is the stuff of internet conspiracy theories, like there’s a chip in the vaccine that will take over their DNA.

“Impossible scientifically,” says the family physician in Chicago. He also hears patients tell him that the vaccine will weaken their immune systems. He responds: “Immunology 101. Vaccines help your immune system.”

Recently he received a flurry of messages from patients who were worried about damage to their testicles — a rumor he ultimately traced back to an erroneous tweet from Minaj alleging that the vaccine causes impotence.

“And I was like, ‘That’s outlandish. That’s a bit outrageous.’ So a lot of just kind of counseling that I did not expect to have to do.”

Some of the misinformation is delivered from the pulpit, he said. People have sent him sermons of preachers saying the vaccine is “ungodly or there’s something in it that will mark you,” a reference to a verse in Revelation about the “mark of the beast” that some Christians cite in not getting vaccinated.

“There’s a mixture of like almost fear … and saying, “Hey, if you do this, maybe you’re not as faithful as you should be as, say, a Christian.'”

Most common, though, is patients just wanting to wait, uneasy with how quickly the vaccine was developed. But he warns them, “Please do not try to wait out a pandemic. A pandemic will win.”

He said his job is “a lot of just dismantling what people have heard,” answering their questions and reassuring them that “vaccines work like this just like when we were kids.”

He has had some luck lately in changing minds. “I’ve had patients that maybe four months ago said ‘You are wasting your time. Dr. Lambert, I don’t want to hear you talking about it.’ And they’ll come back and say, ‘Hey, you know what? I’ve been watching the news. I’ve seen some stuff. I think I’m ready now.’

Utah Doctor: Fear of Vaccine Side Effects, Then Fear of Dying

When Dr. Elizabeth Middleton talks to COVID-19 patients about why they aren’t vaccinated, they often cite fear of side effects. But as they get sicker and sicker, a different sort of fear sets in.

“They sort of have this sinking look about them, like ‘Oh, my God. This is happening to me. I should have been vaccinated,'” said the pulmonary critical care doctor at the University of Utah hospital in Salt Lake City.

She hears often that the vaccine was developed too quickly. “Who are you to judge the speed of science?” she wonders.

Also frustrating is the idea among some patients that there is a “secret agenda” behind getting vaccinated.

“‘There must be something wrong if everyone is forcing us to do this or everyone wants us to do this,'” patients tell her. “And my response to that is, ‘They are urging you to do it because we are in an emergency. This is a pandemic. It is a national and international crisis. That is why we are pushing it.'”

Getting through to patients and their families is a “delicate line,” she says. She tries not to disrupt the patient-doctor relationship by pushing vaccines too hard. But often the people who have been on ventilators need no convincing.