Judy C. Washington, MD, a mentor of many young academic family physicians, particularly underrepresented-in-medicine (URM) physicians, advises her mentees on how to see ahead and plot paths to leadership.

For URM physicians, she also imparts a shared experience of being a minority in the field and helps prepare them for the challenges of facing racism or feeling marginalized or not equitably supported in academic life — and for making change.

While family medicine’s demographics have become more diverse over time, and more so than other specialties, they are not yet representative of the U.S. population. Within academia, male physicians who are Black or African American, or Hispanic or Latino, comprised about 4% and 5% of family medicine faculty, respectively, at the end of 2019, according to data from the Association of American Medical Colleges. For women, these numbers were about 9% and 4%, respectively. (Only those with an MD degree exclusively were included in the report.)

“When you have the privilege to serve in leadership, you have the responsibility to reach back and identify and help others who would not otherwise have the opportunity to be recognized,” Washington said.

Her mentorship work stems in large part from her long-time involvement and leadership roles in the Society of Teachers of Family Medicine (STFM) — roles she considers a pillar of her professional life. She currently serves as president of the STFM Foundation and is associate chief medical officer of the Atlantic Medical Group, a large multisite physician-led organization. She is also coordinator of women’s health for the Overlook Family Medicine Residency Program, which is affiliated with Atlantic Medical Group.

In Washington’s role as associate chief medical officer of Atlantic Medical Group in Summit, N.J., she focuses on physician engagement, satisfaction, and diversity. She also assists in areas such as population health. For the Overlook Family Medicine Residency Program also in Summit, she precepts residents in the obstetrics clinic and in the family medicine outpatient clinic.

Diana N. Carvajal, MD, MPH, one of Washington’s mentees, called her an “inspirational leader” for young academic faculty and said she is a familiar speaker at STFM meetings on topics of workforce diversity, equity, and leadership. She is “passionate” about mentorship, Carvajal said, and has understood “that URMs and women of color were not always getting [the mentorship they need to be successful].”

Ivonne McLean, MD, assistant professor of family and community medicine at Icahn School of Medicine at Mount Sinai, New York, and an attending at a community health center in the Bronx, called Washington for advice a couple of years ago when she was considering her next career move.

“She took a genuine interest in me. She never said, this is what you should do. But the questions she asked and the examples she gave from her own life were incredibly helpful to me [in deciding to pursue a research fellowship]…it was a pivotal conversation,” said McLean, associate director of a reproductive health fellowship and a research fellow in a New York State–funded program.

Carvajal, also a URM family physician, credits Washington’s mentorship with the development of a day-long workshop — held before the annual Society of Teachers of Family Medicine (STFM) meeting — on the low and declining rates of Black males in medicine. “We’d planned it as a presentation, and [she heard of it and] helped us expand it,” she said, calling Washington “warm, welcoming, and encouraging.

“That work and collaboration with her and the others she brought [into the process] have resulted in publications and more presentations and strategy building for diversifying the workforce,” said Carvajal, assistant professor, director of reproductive health education in family medicine, and codirector of the research section, all in the department of family and community medicine at the University of Maryland, Baltimore.

Washington, who says that all or almost all of her mentees are now leaders in their academic institutions and communities, has been instrumental in developing STFM’s mentoring programming and in facilitating the organization’s multifaceted URM Initiative. 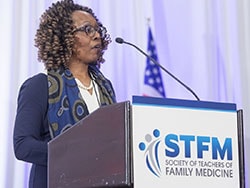 She has been active in STFM since the start of her academic career, and in 2009, while serving as assistant program director for the residency program in which she’d trained, she joined two other African American women, Monique Y. Davis-Smith, MD, and Joedrecka Brown-Speights, MD, in cochairing the society’s Group on Minority and Multicultural Health.

It was in this space, that Washington said she “heard people’s stories of being in major academic institutions and not feeling supported, not being given roadmaps to success, not getting assistance with publishing, or just kind of feeling like an outsider … of not being pulled in.” Hispanic and African American females, in particular, “were feeling marginalized,” she said.

In 2018, having co-led development of the STFM Quality Mentoring Program for URM faculty, Washington was asked to join the STFM Foundation and subsequently led the STFM Foundation’s fundraising campaign for a new URM Initiative. She exceeded her goal, increasing support for URM participation in meetings and activities, and then participated in an STFM steering committee to create broader and longer-lasting support for URM faculty, community teachers, and medical students and residents going into academic family medicine.

Increasing the percentage of URM family medicine faculty in leadership positions — and raising awareness of structural barriers to achievement — is one of the current pillars of the URM Initiative.

As part of her mentoring, Washington helps URM physicians navigate the minority tax — a term referring to the uncompensated citizenship tasks that are more often assigned to Black and other URM physicians than to White physicians, and that take time away from scholarship, further perpetuating inequities.

“Some of our young faculty members find themselves thrust into being the diversity and inclusion leaders in their institutions at a level at which they feel little power and little buy-in from [leadership],” she noted.

A commentary written by Washington and several colleagues on the minority tax as it impacts women — and the need to build a “tax shelter” to make academic medicine a more just environment for URM women — was published earlier this year in the Journal of Women’s Health.

She also answers e-mails and fields phone calls from young URM faculty who are mulling career moves and facing other familiar challenges. 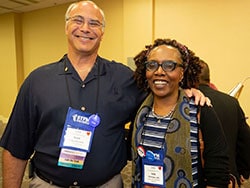 Physicians who are URM, and African American physicians in particular, tend to “get pulled into the [often underserved] communities, into the patient care and community service areas,” Washington explained. “But unless you convert these projects into scholarship and publications, and unless you serve on a national committee outside of your institution, you’re not going to be promoted.”

Washington helps junior faculty envision themselves 5-plus years down the road, find what she calls scholarly “passion projects,” and prepare themselves for their next steps.

She helps her mentees navigate other parts of the continuum of unconscious bias and racism as well, from microaggressions from colleagues to overt discrimination from patients.

“I spend countless minutes fielding texts and phone calls from those who need support,” she wrote in a blog post. “They are a constant reminder that I must continue to speak up when I get the opportunity to do so.”

A Journey Through Family Medicine, and Through Bias and Racism

Washington’s early days in medicine included graduating from Meharry Medical College in 1983 and the Mountainside Family Practice Residency Program in 1990. Following 6 years of working in a private practice in rural Maryland, she moved to academia, spending 6 years at East Tennessee State University and 4 years at the UMDNJ–New Jersey Medical School in Newark as an assistant professor of family medicine.

As had happened in rural Maryland, bias and racism have too often lurked during her career as a physician.

“I grew up in Alabama so I was pretty much ready to deal with racism in the South,” Washington said. “What I was not ready for was coming to the Northeast and seeing that you’re marginalized because you’re not invited into the room. Or if you do go into spaces when you’re the only one, you often don’t feel as welcomed as you thought you might be.”

Her ideas and contributions were too often dismissed, she wrote in a 2020 blog entry posted on her LinkedIn page. And during contract negotiations, “I was not aware of all the information that my White colleagues had. They had the advantage of inside information.”

Washington says that “it took a village” to make her who she is today: teachers in her segregated schools in Alabama, one of her college professors, her best friend in medical school — and STFM, “where the list [of her own mentors] is long.”

This article originally appeared on MDedge.com, part of the Medscape Professional Network.

Paxlovid: Covid-19 rebound seen in some people after taking the Pfizer drug

Coffin Ombre Nails- How to achieve this Funky Design?